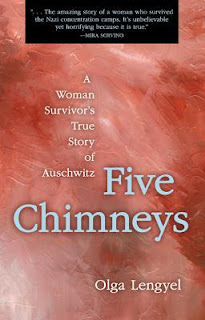 Olga Lengyel tells, frankly and without compromise, one of the most horrifying stories of all time. This true, documented chronicle is the intimate, day-to-day record of a beautiful woman who survived the nightmare of Auschwitz and Birkenau.

Having lost her husband, her parents, and her two young sons to the Nazi exterminators, Olga Lengyel had little to live for during her seven-month internment in Auschwitz. Only Lengyel's work in the prisoners' underground resistance and the need to tell this story kept her fighting for survival. She survived by her wit and incredible strength.

Despite her horrifying closeness to the subject, Five Chimneys does not retreat into self-pity or sensationalism. When first published (two years after World War 2 ended), Albert Einstein was so moved by her story that he wrote a personal letter to Lengyel, thanking her for her "very frank, very well written book".

This book is a necessary reminder of one of the ugliest chapters in the history of human civilization. It was a shocking experience. It is a shocking book.

Five Chimneys is one of the most formidable memoirs that I have ever, or will ever, read. This is a no-holds-barred portrayal of life in the Holocaust's largest extermination camp, Auschwitz-Birkenau, vividly remembered by a Hungarian woman, Olga Lengyel, who endured seven long months there.

This is a book that needs to be read in order to fully appreciate the true intensity of both the experiences that Lengyel faced and the true horrors of the Holocaust in general. It is impossible to put this across in a review. The book was more factual rather than reflecting on Lengyel's emotions, but, thankfully, this didn't detract from the effectiveness of the book. The author's ability to submerse the reader in the depressing, intimidating atmosphere of the camp and to really make you feel as though you're there is as impressive as it is disturbing. The honesty and authenticity of the book is both uncomfortable and necessary. Though the book is not very long at just over 230 pages, it took me a significantly long time to read due to the content. I had to stop reading several times as the information was just so graphic and impactful. This is not a negative - it is important that we are told the true, unfiltered horrors of this period of history.

Many topics are covered in this memoir, particularly the everyday experiences in the camp including Lengyel's medical work in the women's camp in Auschwitz-Birkenau. This part of this book which will be particularly interesting and informative to those who have read the fictional books 'The Child of Auschwitz' by Lily  Graham and 'Cilka's Journey' by Heather Morris. We also hear of Lengyel's experiences with other people in the camp, an assortment of other prisoners - and more well-known historical figures such as Dr Josef Mengele and the infamous Irma Grese.

It is difficult to criticise any memoir, especially one from a Holocaust survivor, but there was one particular issue in this book that did bother me. The author repeatedly refers to 'homosexuals and other perverts' and criticises the 'feeble-minded' which I found very difficult to stomach. The book is a reflection on the impact of hatred and persecution against others, yet the author then perpetuates this by being discriminative herself. I understand that the book was originally published in 1947, but I was still disappointed by this.

Overall, this book was vivid, disturbing and one of the most effective pieces of writing concerning experiences at Auschwitz-Birkenau. This is a book that is certainly not enjoyable but it is educational and it is so important. I would highly recommend this book to any adult looking for more information about the Holocaust.