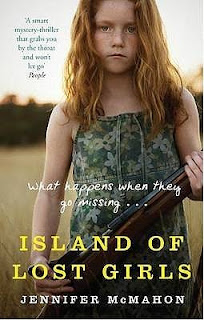 While parked at a gas station, Rhonda sees something so incongruously surreal that at first she hardly recognises it as a crime in progress. She watches, unmoving, as someone dressed in a rabbit costume kidnaps a young girl. Devastated over having done nothing, Rhonda joins the investigation. But the closer she comes to identifying the abductor, the nearer she gets to the troubling truth about another missing child: her best friend, Lizzy, who vanished years before. For this is not the only white rabbit Rhonda has known - there was another in her childhood; one she feels she has been chasing all her life. The rabbit of her past holds the key to a mystery that has stained the lives of Rhonda and her friends, and now she must track him down - even if it means following where she doesn't want to go ...From the author of the acclaimed Promise Not to Tell comes a chilling and mesmerizing tale of shattered innocence, guilt, and ultimate redemption.

When I started Island of Lost Girls, I had quite high hopes for it. I thought that the premise was really intriguing and I enjoyed the opening section. Our protagonist, Rhonda is at a gas station when she witnesses the abduction of a child by a person wearing a rabbit costume. Following this, she decides to find out what happened to the child and who the person in the costume was.The event also leads us to learn about the unsolved disappearance of Rhonda's childhood friend, Lizzy.

I enjoyed some of the writing and when we were first introduced to the child's imaginative  setting of the 'submarine' (a car in the backyard), I was originally quite impressed and enjoyed it, but unfortunately the novelty quickly wore off. The author takes us into this fictional world of the submarine, which is nice and novel but didn't really end up having much significance. As well as the submarine, the book also explored a rabbit theme and a Peter Pan theme but unfortunately these didn't work very well. These sections of the book felt like the author was just trying too hard to try and be elaborate and quite honestly, the book would have been better without them. It almost felt as though the author was trying too hard.

Though the book wasn't very thick, it felt as the author was trying to fit in as much as possible meaning that it was quite difficult to keep focus on one part of the story. There are two missing person stories going on at the same time alongside all of the discussions of childhood play. The story itself was very predictable, so that made it slightly easier to follow. There is a deeper, very dark storyline weaved within the story of the children's group which had potential to be interesting but was just far too predictable to redeem the book.

Overall, this isn't a book that I would recommend. Unfortunately the book couldn't keep my attention and it was neither creepy or intriguing enough.