The Brothers of Auschwitz 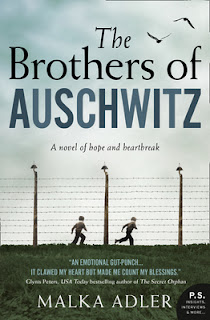 The Brothers of Auschwitz by Malka Adler (Translated by Noel Canon)

An extraordinary novel of hope and heartbreak, this is a story about a family separated by the Holocaust and their harrowing journey back to each other.

My brother’s tears left a delicate, clean line on his face. I stroked his cheek, whispered, it’s really you…

Dov and Yitzhak live in a small village in the mountains of Hungary, isolated both from the world and from the horrors of the war. But one day in 1944, everything changes. The Nazis storm the homes of the Jewish villagers and inform them they have one hour. One hour before the train will take them to Auschwitz.

Six decades later, from the safety of their living rooms at home in Israel, the brothers finally break their silence to a friend who will never let their stories be forgotten.

It's incredibly difficult for me to know where to even start when reviewing this book as it left me speechless. As you've probably determined from my other reviews, I try to consume as many books about the Holocaust (and Auschwitz in particular) as I can and, so far, this has to be the best book that I've read regarding the subject.

The book is a work of historical fiction which is strongly based on the true stories of two young brothers. The Brothers of Auschwitz follows the story of characters Dov and Yitzhak after they have been expelled from their home in Hungary during the Holocaust and follows their journey all the way up to modern day. The story is intertwined with present-day chapters of the author's journey through Israel. Despite the title, a relatively short amount of this book is actually set in the Auschwitz camp itself and around half way through we begin to learn about the start of the death march and destruction the camp. I found this very interesting and enlightening - we even get to see the long-term effects of all of the events and how it affects the brothers sixty years on.

It took me a short while to really get into this book due to the distinct lack of punctuation (particularly speech marks), but once I become immersed in the story I was absolutely captivated. This book certainly isn't for the lighthearted but that's actually one of the things that makes it so extradordinary - the descriptions of the emotions and experiences are so visceral, so raw and really do take your breath away. I literally had to put the book down and take a break on several occasions. The honesty and detail in the writing which portrays some of the most abhorrent behaviour of humankind is absolutely jaw-dropping. I have read some books which are more sanitised versions of real events and whilst I can understand why authors do that, I think that this book makes such an impact because of the unadulterated, often sickening descriptions. The honesty is heart wrenching.

Overall, this is a book that will stay with me for a very, very long time and it's certainly a book that had one of the biggest impacts on me. I would recommend this to anybody who is interested in the the Second World War and wants a raw, no holds barred story about the events and impact of the Holocaust.