The Twins of Auschwitz 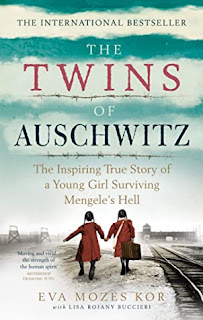 The Nazis spared their lives because they were twins. In the summer of 1944, Eva Mozes Kor and her family arrived at Auschwitz. Within thirty minutes, they were separated. Her parents and two older sisters were taken to the gas chambers, while Eva and her twin, Miriam, were herded into the care of the man who became known as the Angel of Death: Dr. Josef Mengele. They were 10 years old. While twins at Auschwitz were granted the 'privileges' of keeping their own clothes and hair, they were also subjected to Mengele's sadistic medical experiments. They were forced to fight daily for their own survival and many died as a result of the experiments, or from the disease and hunger rife in the concentration camp. In a narrative told simply, with emotion and astonishing restraint, The Twins of Auschwitz shares the inspirational story of a child's endurance and survival in the face of truly extraordinary evil. Also included is an epilogue on Eva's incredible recovery and her remarkable decision to publicly forgive the Nazis.

Through her museum and her lectures, she dedicated her life to giving testimony on the Holocaust, providing a message of hope for people who have suffered, and worked toward goals of forgiveness, peace, and the elimination of hatred and prejudice in the world.

The Twins of Auschwitz is the memoir of Eva Mozes Kor, an inspirational Jewish woman who managed to survive the horrors of Auschwitz, primarily thanks to her 'fortune' of being born as a twin. The story tells us of Eva and, her sister, Miriam's time in Auschwitz, what led to them being there and what happened after liberation.

Eva was and will forever continue to be an educator. If you've watched documentaries about the Holocaust, in particular, Auschwitz, it's likely that you may have heard of or seen Eva before - I was familiar with her story due to the large amount of education and experience she has shared on numerous historical documentaries but even with prior knowledge of her story, it was very interesting to get a slightly more detailed account of her experiences in the camp.

This is a relatively short book, with photographs interspersed throughout, and so it didn't take me long to read at all - only a few hours. Expectedly, we do learn some horrific things about the treatment of Eva, her sister and other prisoners at Auschwitz - certainly enough to have a significant emotional impact, but the book isn't overly distressingly-descriptive and so would be a perfect introduction to the Holocaust for school-aged children and upwards. The memoir gives us a particularly fascinating insight to Doctor Mengele's heinous 'medical experiments' on twins.

Something that makes this book, and Kor herself, stand out is that she discusses the issue of forgiveness. Eva repeatedly stated that she forgave the Nazi's for what they did to her and that is a statement that, understandably, has caused a lot of controversy. I found this concept both difficult and interesting to read about but it was extremely interesting to get an insight into the lasting mental  impact of what happened. It certainly leaves you with a lot to think about.

Overall, this is a very simple yet effectual recollection of Eva and Miriam's lives. I would certainly recommend The Twins of Auschwitz to anybody - it is an important, intriguing and unpleasant story that must be remembered. Whether you know little or lots about the Holocaust, this is certainly worth reading. Kor was undoubtedly a very inspiring woman and will continue to be, well into the future.