Vivian Versus The Apocalypse 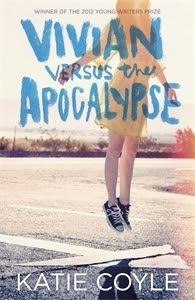 Vivian Versus The Apocalypse by Katie Coyle
Paperback, 288 pages

A chilling vision of a contemporary USA where the sinister Church of America is destroying lives. Our cynical protagonist, seventeen-­year-­old Vivian Apple, is awaiting the fated 'Rapture' -­ or rather the lack of it. Her evangelical parents have been in the Church's thrall for too long, and she's looking forward to getting them back. Except that when Vivian arrives home the day after the supposed 'Rapture', her parents are gone. All that is left are two holes in the ceiling...Viv is determined to carry on as normal, but when she starts to suspect that her parents might still be alive, she realises she must uncover the truth. Joined by Peter, a boy claiming to know the real whereabouts of the Church, and Edie, a heavily pregnant Believer who has been 'left behind', they embark on a road trip across America. Encountering freak weather, roving 'Believer' gangs and a strange teenage group calling themselves the 'New Orphans', Viv soon begins to realise that the Rapture was just the beginning.

As soon as I saw the cover and title of this book, I had to know what it was about - it looked contemporary but the title sounded a bit dystopian - with those being my favourite genres, I had to investigate! I read the description and it did sound fantastic. I was curious to see how the author would put this together and I hoped that it would work out well - thankfully it did!

This isn't really like any other book that I've read and that is a fantastic thing. This is a contemporary, realistic book, but it's also apocalyptic. We're introduced to a situation where a lot of the American population have decided to follow a new religion and under the Church of America, many, but not all, of these people have disappeared in what has been known as the 'Rapture'. With Believers and non-believers left behind, a group of teenagers set out to try and discover what is really going on. Of course, there are plenty of twists and some stumbling blocks along the way which makes this book a definite page turner. There was a constant wonder in my mind as to what the Church of America really was, or what it involved. There is a lot of substance to this book and the characters also face a lot of other issues that are interwoven into the book alongside the Rapture.

I can't tell you about all of the issues - you'll have to read it for yourself - but nothing ever seems clear-cut or fully comprehensible, at least not until the end of the book. It's interesting to see how your thoughts and opinions change as the book progresses and we learn new things. The pace is consistent and there always seems to be something new to find out, making this a real page turner. There is one warning for you though - it is extremely hard to put it down! I could have happily sat and read this all in one go, it had me hooked!

The characters really helped this book to be a success. Our main character, Vivian, was really easy to connect with, she had real guts and determination but there was always that sense of vulnerability around her, which made her so real. I loved meeting her best friend, who seemed awesomely kick-ass whilst still being obviously fragile, especially due to problems within her own family. I also enjoyed reading about Edie, a pregnant Believer - it was interesting to see the differences between a Believer and the non-Believers. The character who grew on me most was Peter, the love interest to our protagonist. I was a little sceptical when we first met him, he seemed to be just thrown into the story quite randomly and I feared it would be an awful case of instant love between the two characters, but I was happily proved very wrong. The relationship between Vivian and Peter was so lovely to read about - it all felt so natural, slightly shaky (as a teenage romance can be) and both characters bonded in such a gradual, loving way. Their romance somehow felt intricate, it felt precious and a lot deeper than a lot of other YA romances - perhaps due to the problems they both faced and the conflicts that arose. I would have loved to read more about Vivian and Peter - I don't know if there will be a follow on to this book, but if there was, I wouldn't hesitate to pick it up.

Vivian Versus The Apocalypse has been one of my top summer reads of 2013 and will be a highlight of the books I have read throughout the year due to the fantastic writing and the compelling, refreshing plot idea. Katie Coyle has already won the Hot Key Books Young Writers Prize for this book and I truly hope that she wins more - she is clearly extremely talented and I think her writing rivals that of some of the current top YA authors. I will be recommending this to anyone I can!