The Secret of Ella and Micha 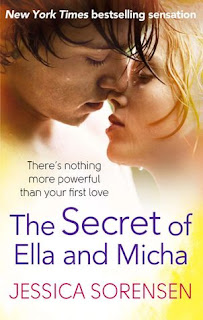 The Secret of Ella and Micha by Jessica Sorensen
Paperback, 320 pages

The girl he thinks he loves needs to disappear. I don't want tonight to be irreversible, so I pull away, breathing him in one last time.Ella and Micha have been best friends since childhood, until one tragic night shatters their relationship and Ella decides to leave everything behind to start a new life at college, including Micha.But now it's summer break and she has nowhere else to go but home. Ella fears everything she worked so hard to bury might resurface, especially with Micha living right next door. Micha is sexy, smart, confident, and can get under Ella's skin like no one else can. He knows everything about her, including her darkest secrets. And he's determined to win back the girl he lost, no matter what it takes.

The Secret of Ella and Micha is both the first 'New Adult' book that I have read, and the first book written by Jessica Sorenson that I have read - thankfully, it didn't disappoint! To be honest, like a lot of people, I'm a little confused by the term New Adult, so it's probably easier for me to say that both young adults and adults alike should enjoy this book, personally, I think it is most ideal for older young adults.

The Secret of Ella and Micha is about, you guessed it, two characters called Ella and Micha! At the beginning of the novel, we are introduced to Ella. We only really get a vague idea of who Ella is at the start - she left her home months ago  after years of trouble and a particularly difficult night and is now trying to be a different person. However, soon after we meet her, Ella returns to her home neighbourhood and her true identity starts to show - especially when she is around her almost lifelong friend - Micha.

It is undeniable that there is huge chemistry between Ella and Micha, it is so easy to see that they are connected and suited to each other. Sorensen has done an amazing job of portraying their relationship and managed to get the tension between them, sexual and otherwise, just right. Ella and Micha are clearly two different people with two different personalities, but they fit perfectly together. Some people may find the whole 'soulmate' idea a little too saccharine, but I was surprised with how well the idea worked within the book, probably as the romance was quite angst filled and balanced out with other issues alongside it.

As well as love, this book also about loss. Ella and Micha have both had their own troubles and are coming to terms with them. We are not fully aware of their problems at the start of the book which gave it a certain sense of vagueness that I must admit, I struggled with at first. Micha has an absent father who seems to always be in the back of his mind and Ella lost her mother when she committed suicide, leaving her to deal with her alcoholic father. Their problems are unresolved and it's clear that they have certainly had an impact on their relationship. As they both come to terms with their issues, they become even closer and things for both the characters and us as readers seem much clearer.

As you can tell, I enjoyed this book and I thought that Sorensen did a very good job of portraying what she wanted to. There was, at points, sometimes a little too much vagueness in this book for me and sometimes I had a little problem with how it flowed, but overall the book seemed well written and for the most part, enjoyable. I would definitely be willing to read anything else that Sorensen offers in the future and think that this will be a great hit for both young adults and adults alike.