You may have noticed that I'm quite a fan of Phil Earle's writing - I read both Being Billy and Saving Daisy as soon as they were released and I'm so glad that I have also had the opportunity to read his latest novel, Heroic. When I was offered the chance to participate in the blog tour, I jumped at the chance and so Phil provided me with an exclusive piece - a list of his Top Ten Underdogs!
Here is what Phil had to say:
Underdogs.
I love them.
Whether they’re on the page or the big screen, there’s something about them that is completely intoxicating.
So here, in no particular order, are my top-ten-kids-books underdogs, the individuals you think are going to amount to nothing…but delight in proving you wrong.

Stanley Yelnats
Holes by Louis Sahar
His family is cursed and he’s been busted for pinching a pair of sneakers. Sent to the steaming hot desert to dig holes all day and surrounded by a ragtag bunch of reprobates. But, Stanley’s journey is only just beginning.
One of the greatest characters ever created. An underdog so fine we named our son after him (well, him and Flat Stanley)

Ponyboy, Sodapop, Darry, Jonny, Dallas
The Outsiders by SE Hinton
I still struggle to understand how S.E. Hinton managed to create such vivid characters when she was only a teenager herself.
I read this book every year, as these lads have nothing: no money, no status or prospects, but they have each other, and there is such power in their relationships that it destroys me every time. A huge influence when writing HEROIC.

Stanley Lampchop
Flat Stanley by Jeff Brown
This young man doesn’t let being squashed flat by his brother’s notice board stop him living. He gets posted to California in an envelope to visit friends and foils an art crime, before being re-inflated by his brother’s bike pump. Classic, classic story-telling.

Skellig
Skellig by David Almond
Another of the books that changed everything for me. Who’d have thought the rambling, cobwebbed figure living in the ruined garage could possibly change Michael’s world forever. Skellig never fails to move or amaze me.

Sig
Revolver – Marcus Sedgwick
A book so tense and sparse that there isn’t a single word misplaced or misused. I’d give my right hand to write as lyrically as Marcus.
In Sig, he has created a character facing both overwhelming odds and grief. He’s a character I absolutely loved.

Martyn Pig
Martyn Pig by Kevin Brooks
This book was a game-changer for me, as Kevin Brooks came in and broke all the rules, making you empathize with a character who is making some morally complex decisions. Kevin is one of few authors I’d camp outside a bookshop for. A new book from him is an event to look forward to.

Joey Pigza
Joey Pigza Swallowed the Key by Jack Gantos
Jack Gantos’ books about an ADHD kid are an absolute joy. Everyone’s written Joey off, his home life is chaotic and his head feels like it’s buzzing with bees. This book has more heart than any I’ve ever read.

Dermot Milligan
The Donut Diaries by Anthony McGowan
Dermot is fat, there’s no getting away from it, which sees him set firmly as one of life’s underdogs. What I love about him though, is despite his food-based flaws, he still manages to out-smart the FHK (the floppy-haired kid) every time.
So much more than a UK version of Wimpy Kid. Knocks spots off it in fact…

The Wolfe Brothers
Fighting Reuben Wolfe by Markus Zusak
Yes, ‘The Book Thief’ is magnificent, but so are the Wolfe brothers. HEROIC is all about brotherhood and the sacrifices Jammy and Sonny are forced into, and this book handles that same theme beautifully. Savage and tender in equal measure, you can’t help but root for this devoted pair.

Felix
Once/Then/Now/After by Morris Gleitzman
Not many writers could take a character and give them an arc as dramatic as Felix’s. Spanning a lifetime and four incredible books, we see Felix battling the Nazis in WWII as well as bush fires in his later years. Morris creates wonderful, three dimensional characters, and Felix is one of the finest in any children’s books.

Hope the list was entertaining, was certainly fun putting it together… 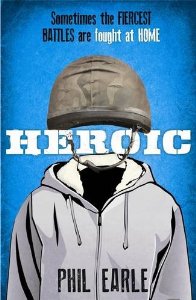 Heroic by Phil Earle is available to purchase now!

Thank you to Phil for writing this fantastic post and to Penguin for giving me the opportunity of hosting a stop in this tour.
Posted by Stepping Out of the Page at 4/26/2013 12:00:00 am