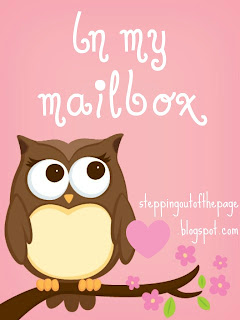 In My Mailbox (IMM) is hosted by Kristi @ The Story Siren
In My Mailbox is a place to showcase your new books,
whether you obtained them through the post or otherwise. 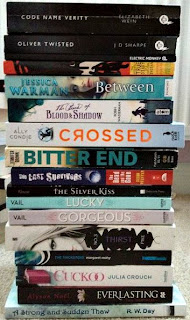 These are all of the books that I received or bought this week!

I received some amazing ARC and review copies of books from some fantastic publishers this week! I received Code Name Verity and Oliver Twisted which will be being released this February. They both sound very interesting. I received The Absolutely True Diary of a Part-Time Indian which I has been on my wish list for such a long time, so I'm hoping that will live up to my expectations! Cinder, Between and The Book of Blood & Shadow are relatively new releases over here in the UK and I am super excited to get them read - I've heard some fantastic things about them and the ideas behind them are great!

I'm so pleased with the three swaps that I received this week! I have been wanting a copy of Bitter End for a while but it's been notoriously difficult to find in the UK. I'm interested to see how Crossed is as I read Matched and enjoyed that (though it wasn't amazing). A Strong and Sudden Thaw is a bit of a wildcard as I hadn't heard of it before accepting it, but it seems to have had some great ratings. I am so excited to read The Dead and the Gone as I loved Life As We Knew It, and I haven't heard much of The Silver Kiss, but it looks good enough!

I have the first two Thirst volumes sitting on my bookshelf, waiting to be read, but when I found the Thirst No. 3 in a discount book store, I couldn't resist. I also found myself intrigued by Cuckoo when it was on the adults bestsellers chart a month or so ago and as that was there, I just had to pick that up too! I received The Tricksters free on offer, too! Two charity shop finds that I'm very proud of this week - Lucky and Gorgeous are the first two books in The Avery Sisters trilogy and I'm so eager to read them!
Posted by Stepping Out of the Page at 1/29/2012 11:33:00 am