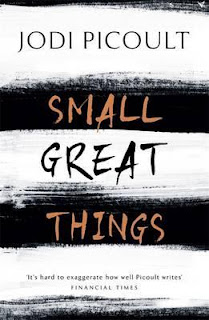 Ruth Jefferson is a labor and delivery nurse at a Connecticut hospital with more than twenty years' experience. During her shift, Ruth begins a routine checkup on a newborn, only to be told a few minutes later that she's been reassigned to another patient. The parents are white supremacists and don't want Ruth, who is African American, to touch their child. The hospital complies with their request, but the next day, the baby goes into cardiac distress while Ruth is alone in the nursery. Does she obey orders or does she intervene?Ruth hesitates before performing CPR and, as a result, is charged with a serious crime. Kennedy McQuarrie, a white public defender, takes her case but gives unexpected advice: Kennedy insists that mentioning race in the courtroom is not a winning strategy. Conflicted by Kennedy's counsel, Ruth tries to keep life as normal as possible for her family—especially her teenage son—as the case becomes a media sensation. As the trial moves forward, Ruth and Kennedy must gain each other's trust, and come to see that what they've been taught their whole lives about others—and themselves—might be wrong.With incredible empathy, intelligence, and candor, Jodi Picoult tackles race, privilege, prejudice, justice, and compassion—and doesn't offer easy answers. Small Great Things is a remarkable achievement from a writer at the top of her game.

Although this book debuted in 2016, it couldn't seem more relevant than it does right now. Small Great Things is a story about prejudice - specifically the very relevant and extremely important issue of racism. At a time where the Black Lives Matter movement is, rightfully, so prominent in the news, there couldn't be a better time to pick up this book and open your eyes to the everyday challenges for people of colour in a society that clearly embraces white privilege.

This is the story of Ruth Jefferson, an African American nurse who is blamed for the death of Davis, the newborn child of Turk and Brittany Bauer, two white supremacists. The storyline is something typical of Jodi Picoult and it was something that I was excited to read about, I could only hope that she'd give such a serious, emotive and what can be a divisive topic, justice. I was particularly concerned that Picoult, as a white author, ran the risk of appearing to speak for people of colour, but I think that she avoided that through her creation of Kennedy - Ruth's female lawyer who slowly realises that she's been benefitting from white privilege for the whole of her life. Both the author herself and Kennedy admit that they have been passively racist in their lives and I'm sure a lot of white readers will shock themselves and begin to realise that they have been too, despite their intentions. Like she does for her others, Picoult has clearly done a lot of research for this book and it shows. She helps school the reader on racism and white privilege in a very relevant, matter of fact, informative way without sounding preachy.

Ruth is a beautifully written character who seems very real, in both the sense of ability to imagine her as a person and her genuine personality. I really can't fault her character at all and for me, she was certainly the star of the book. Her passion, strength and honesty were all extremely admirable as were her relationships with her family - particularly her son, Edison. I initially didn't think that Kennedy was remarkable but she certainly redeemed herself as the book progressed and she had a pivotal role in teaching the reader about white privilege.

The characters I weren't so keen on were Turk and Brittany, though not solely because they were white supremacists. I realise that Picoult did research these characters but unfortunately, for me, they just didn't seem 'real' enough. Understandably, they were there for the shock factor but I just felt like they didn't have enough substance to them and that's all they were there for.  Of course, there really is no excuse for white supremacy, but I would have liked some more reasoning from Turk and to see his attempts of justification for his beliefs rather than simple aggression.

Overall, I thought this was a page-turner with a great purpose and I believe it achieved what Picoult intended it to. The main story was brilliant but I don't think that the epilogue was necessary - it was the only thing that slightly diminished the story for me and reduced my rating.  I am a big fan of Jodi Picoult and I can't wait to see what she offers next.