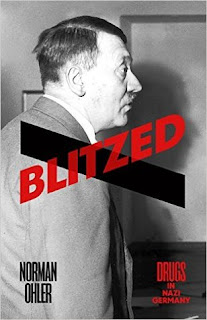 'Extremely interesting ... a serious piece of scholarship, very well researched' Ian KershawThe Nazis presented themselves as warriors against moral degeneracy. Yet, as Norman Ohler's gripping bestseller reveals, the entire Third Reich was permeated with drugs: cocaine, heroin, morphine and, most of all, methamphetamines, or crystal meth, used by everyone from factory workers to housewives, and crucial to troops' resilience - even partly explaining German victory in 1940.The promiscuous use of drugs at the very highest levels also impaired and confused decision-making, with Hitler and his entourage taking refuge in potentially lethal cocktails of stimulants administered by the physician Dr Morell as the war turned against Germany. While drugs cannot on their own explain the events of the Second World War or its outcome, Ohler shows, they change our understanding of it. Blitzed forms a crucial missing piece of the story.

Blitzed by Norman Ohler is a book that I've had on my shelf for quite a while and have always been wanting to read, but never got around to it. I can finally say that I did pick it up - and couldn't put it down! I expected to find this book interesting, but was still surprised at how much I enjoyed it.

This book is an absolute revelation. No matter what you think you know about the   Third Reich and their actions, if you haven't read this then you are missing out on a vital part of the its history - though understandably, this part isn't usually covered in school history lessons. Whilst I already assumed that drugs may have taken a part in Nazi Germany and certainly Adolf Hitler's reign of terror, I never realised quite how big that role was. This comprehensive history of the Hitler and the Third Reich's relationship with drugs is an extremely interesting piece of rarely discussed history.

Initially, I did worry that I'd get a little bored with this book - I thought it would be difficult for an author to discuss one subject for so long without me becoming bored, but I needn't have worried at all. With every chapter, I learned something new and something that was guaranteed to make me gawp with surprise. We  sporadically follow the life of Theodore Morell, a Jewish man who becomes Hitler's personal doctor and, therefore, drug dealer. Learning about Morell was interesting in itself, exploring the conflict between his beliefs and the Nazi's desire for his work.

The book covers the subject of drugs in everyday life in Germany, which I was shocked to learn were easily available and commonly used, with crystal meth   even being infused within chocolates and sweets. I learned about how new combinations of drugs were tested and how they were crucial to keep soldiers awake and fighting during battles - despite the negative side effects. Finally, I learned about the downfall of Adolf Hitler, his increasing need for cocktails of drugs and the awful side effects that ensued.

Overall, I can't recommend this book enough. I would recommend it to anyone with an interest in World War Two, The Third Reich or the history of pharmaceuticals and drug use. The book is very concise and well written, informative, surprising and above all, incredibly interesting.