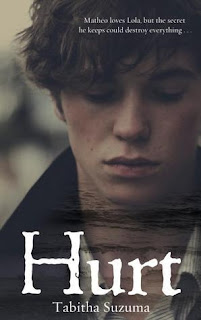 At seventeen, Matheo Walsh is Britain's most promising diving champion. He is wealthy, popular - and there's Lola, the girlfriend of his dreams.But then there was that weekend. A weekend he cannot bring himself to remember. All he knows is that what happened has changed him.Matheo is faced with the most devastating choice of his life. Keep his secret, and put those closest to him in terrible danger. Or confess, and lose Lola for ever...

Having heard about the creation of Hurt, I was so eager to get my hands on a copy as soon as it was released. I have only read one of Suzuma's previous books (A Voice In the Distance), but I really enjoyed it and I admired the way she tackled a difficult subject. It seems like that is this author's speciality - tackling those real-life, gritty subjects that really do need to be addressed. I'm certainly not one to shy away from these issues and so I couldn't wait to pick it up.

Our main character is Matheo, a diving champion, who we first meet in his bedroom, in a confused mess the night after his attack. Mattheo doesn't remember much about what happened to him the night before and it's slowly revealed to us as he himself begins to recall the events and starts opening up to his girlfriend, Lola. Personally, I didn't really connect to the characters in this book. At first, they're simply displayed as your cliché private school kids, then we later (sort of) get to see how they handle Matheo's secret. The other significant other than Matheo was his girlfriend, Lola, who I didn't not like, but who I didn't really warm or connect to - she didn't really seem to have much of a personality and I didn't know who she was, apart from being Matheo's partner. Saying that, we don't really get to know much about any of the characters, just how they react to a certain situation.

Hurt is a book that tackles an emotional subject - one that I won't name as it is clouded in mystery until it's revealed quite late in the book. I predicted what had happened to Matheo very quickly - whilst I didn't know exactly how he came to be in the situation he was in, or who the other party was, I thought it was blindingly obvious what had happened to him. I think that this was a major flaw of the book for me.  I spent a lot of this book just waiting, and waiting, and waiting some more just to read what I already thought. A lot of the book relied on tension and build up to the revelation of the event, but to me it was just so obvious and so any tension just fell flat  for me - I sort of just wanted the author to get on with it, get to the point, and to face up to the issue, to do something about it, something that packed a real punch. I won't deny that I didn't guess everything, there was a twist that I wasn't expecting, but unfortunately it came a little too late for me.

The book was well written for the most part, I liked Suzuma's descriptive style and it was initially enjoyable to read, but after a while, it did begin to feel repetitive and the amount of description was on the line of becoming tedious. There was not enough substance to the first part of this book in order to make it exciting or easy to connect to. I admire Suzuma for writing about an emotional subject, but unfortunately, for me, there was not enough personal depth to the characters in order to make it work. I am definitely not  saying that this is a bad book, but rather that it was a predictable one and that's why, for me, it wasn't an entire success.