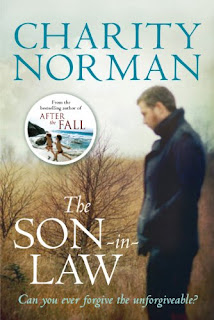 
Shelves:  adult-fiction, books-i-own, favourites, lasting-impression, mental-health, read, read-in-2013, realistic-fiction, really-good
My rating: 5 of 5 stars
Description via Goodreads:
For three years Joseph Scott has been haunted by one moment-the moment that changed his life forever. Now he is starting over, and he wants his family back more than anything.This is the story of Joseph and his wife, Zoe; of their children, Scarlet, Theo and Ben, for whom nothing will be the same; and of Zoe's parents, who can't forgive or understand.A compelling, moving and ultimately optimistic story of one man who will do almost anything to be reunited with his children. And of the grandparents who are determined to stop him.

Wow. I read Charity Norman's After The Fall last year and loved it. This year, I was offered the chance to read an advance copy of The The Son-in-Law and I've just been blown away. I do love books and reading, but it takes a lot for me to say I love one book in particular, but I can honestly say that I really did love this one.

To be honest, because I really enjoyed Norman's previous novel, I quickly accepted this book for review even before reading the blurb - I liked her writing and ideas enough last time to be sure enough that I would enjoy her latest release. After reading the blurb, I was even more excited as it definitely sounded like a book I would enjoy, even though the description was quite vague. The premise of this book is a compelling one, and I can't help but think of it turned into a serial-drama or short film. The descriptions were vivid - it was not at all difficult to imagine yourself there with the characters. Norman made a fantastic job of setting the different scenes and using them to add to the formation of an atmosphere surrounding the characters.

This is the story of a family which has been torn apart after the death of Zoe, a mother, a daughter and a wife. We follow Joseph after his release from a prison, where he was held for killing his wife. We also follow Hannah and Frederick, Zoe's parents and the main caregivers of Zoe and Joseph's children, Scarlet, Theo and Ben. We don't know the full story of Zoe's death from the beginning of the book, but as we progress in the book, we start to see what happened and why it happened. As always, not everything is as it first seems. As aforementioned, the book is written in two points of view, from Joseph and Hannah's thoughts, which are strongly in contrast. Nothing is clear-cut, everything has you thinking and wondering who you're most in support of - at no point did I know who I really supported, I almost continuously had conflicting emotions. Norman has done a wonderful job of getting two differing points across fairly and believably.

The children play a very large part in this book, and I think that as a reader, Scarlet was probably easiest to connect with in the sense of conflict of thoughts and feelings - it often felt like the reader was also one of the children, being pushed and pulled by the two different sides. The children were vital in this book and they were so well written. Norman didn't hold anything back, and the kids felt so real, their thoughts and feelings often openly displayed, or painfully suppressed. The psychological aspect of the book was obviously very well thought through and did seem very real. I especially liked reading about Scarlet, the oldest child and a very visceral character. You could really sense the torment inside her and I could never really predict what she was going to do, how she would react to her father or her grandparents.

Another relationship that I'd like to mention and praise, without giving any spoilers, is that of the two grandparents, Hannah and Frederick, which was truly heartbreaking at points. Their bond was incredible and the other issues they had to face at the same time as the release of Joseph Scott really did show their strength and courage.  This book is just packed with emotion and Norman has done a stellar job of portraying several struggles and portraying each individual's unique reactions to the issues. This author really has a way of getting through the paper and into both your head and heart.

Overall, I really loved this book and I would recommend it to anyone, especially fans of authors such as Jodi Picoult. I really hope that Norman gets the praise and recognition that she deserves for not only this book but for her writing in general. Her writing feels so natural and believable - I really can't fault her in any way. I thought that After the Fall was a huge hit, but I honestly think that this book is even better. This is her best release to date and it will definitely be one of the top books I read in 2013. I can't wait to see what Norman releases next!