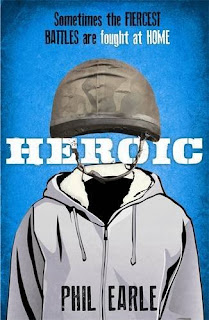 'For the past five weeks I'd prayed that I'd never see my brother's name spelt out in poppies. In the weeks that followed I often wished I had.' Jammy and Sonny McGann are brothers, but that's where the similarities end. One is calm when the other is angry; one has a plan while the other lives purely in the moment. When Jammy returns from Afghanistan a very different man to the one who left, it's Sonny who is left to hold things together. But just how far will he go to save the brother who always put him first? Inspired by S.E. Hinton's "The Outsiders" and by the battles facing young soldiers all over the world, this is a devastating novel about brotherhood and sacrifice, from the award-winning author of "Being Billy" and "Saving Daisy".

When I heard that Phil Earle had a new book out, without knowing the synopsis or seeing the title or cover, I knew that I had to have a copy. Undoubtedly, Earle is one of my favourite authors. Though he's only released two other books, I absolutely adored them and just from those, I know that he can't disappoint.

After my initial excitement, I calmed down enough to read the blurb of Heroic, I was a little surprised - it seemed quite different to the kind of story that I expected, however when I thought again, I thought wow, this is exactly the kind of thing that Earle would write - something raw and gritty, something almost painfully realistic. Once again, Earle's experience with teenagers and young people shines through and gives the story a true sense of authenticity. Earle and his writing shine a light of truth on society today - both the positive aspects and the more negative ones.

Heroic is the story of a gang of teenage boys living in a rough block of flats, in particular the stories of a pair of brothers, Sonny and Jammy. Jammy left his friends when he and another member of the group went to serve for their country in Afghanistan, an experience that would change not only his life, but the life of all of the others around him. I think it was a good idea to read both brothers narration, to see how their thoughts and feelings changed through their experiences. Earle certainly didn't hold anything back with his descriptions of these things - I often felt a little uncomfortable reading, but I knew it was because it was so achingly honest - Earle is writing about things that do happen to and do have an effect on a lot of people.

As you can imagine, war is not a pretty thing, it's not full of happiness. Although war and soldiers are often glorified, the characters and situations in this book are anything but glorified. However, there are some more heartwarming moments, along with loss and the attempts to survive come courage and love. Friendship and support are at the real heart of this book. As Dumbledore would say, "Happiness can be found even in the darkest of times, if one only remembers to turn on the light" and this is a book that first that theory - both Sonny and Jammy go through hell but in the end, they realise they have each other and that gets them through.

I hope you can tell how much I enjoyed this - it is always difficult to put in words how Earle's writing makes me feel. For me, there is nothing better than a realistic book that deals with real issues and this is exactly that. I don't know what Earle is planning next, but I am so excited to find out. If you haven't picked up any of Earle's books, please, do go and pick them up now!