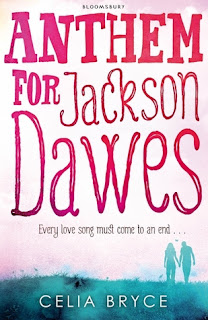 Megan Bright and Jackson Dawes are two teenagers who first meet each other on the hospital ward where they are both being treated for cancer. Megan is scared and worried about her illness, but Jackson seems to be an old hand, having been on the ward for ages. And everybody loves Jackson! He is a whirlwind of life and energy, warmth and sparkle. Megan will need to borrow some of Jackson's extraordinary optimism to face her and Jackson's future. A moving story of first love and a remarkably powerful debut novel.

Anthem for Jackson Dawes is a book that I was very pleased to receive for review - it really sounded like something I'd enjoy. Though the subject matter is rather difficult, I do enjoy reading about real life issues and I was interested in seeing how this YA book turned out. Teenage cancer  has been explored in several extremely popular books, namely The Fault in Our Stars, Before I Die and My Sister's Keeper, so Bryce really had to try hard to give us something new and something with a strong emotional impact.

This book is definitely a hard one to review, which is partially due to the content. In general, I thought that this was a good book which was well written. However, as the book is relatively short at 240 pages, there was not all that much depth to the story or characters. This is a book revolving around young cancer patients, but most respectfully, the characters are the stars of the book - not the illness. I thought it was great that Bryce managed to really emphasise the personalities of the kids. Of course, the characters were all in hospital for a reason - they all had some form of cancer. Bryce is clearly a careful writer - she writes what is necessary, what is suitable for the age group she is writing for. The writing is soft but concise. Personally, I would have preferred some more depth to the book, more detail, more interactions, I especially wanted to know more about the characters, how they really felt.

Our main character is Megan Bright, a teenager with a cancerous brain tumour. Understandably, Megan is not happy being in hospital, let alone in the children's ward. She feels lonely and she worries about her friends, whether or not they will keep in touch with her or not whilst she's sick. There is only one older teenager on the ward, the upbeat, sociable and caring Jackson Dawes. When they first meet, Megan isn't all that nice to Jackson even though he's only trying to be nice. It could come across as a bit 'bratty', but to be honest, I think I would be the same in her situation - she's scared. Jackson and Megan certainly don't click straight away, but as Megan succumbs to his friendship, it's clear that they are a lovely couple of friends. Though it's suggested that it's a romance between the two, I just saw it as a special connection, a friendship.

As you can imagine, this book isn't full of joy, though it's not deeply depressing throughout there is an undertone of melancholy. There are a lot of 'extra' upsetting moments dotted throughout the book, as well as many feelings of uncertainty. Unfortunately, for some reason the book didn't hold the emotion that I really wanted - it wasn't raw, intense or passionate enough, it just didn't grab me in the way that some other books have. Maybe it's because, although I liked them, I didn't relate all that much to Megan or Jackson. Maybe it's the lack of depth or detail. I'm not entirely sure.

Overall, Anthem for Jackson Dawes is a well executed book and one that is more friendly towards younger young adult audience. I am very impressed with Bryce's writing and particularly enjoyed her description of the new cancer unit in the book, based on a unit in my home city. Bryce has done really well and I would certainly like to see more from her in the future.