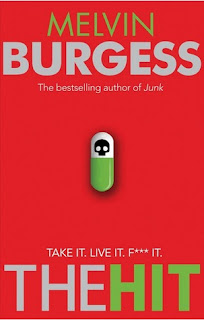 Take it. Live it. F*** it.A new drug is out. Everyone is talking about it. The Hit. Take it, and you have one amazing week to live. It's the ultimate high. At the ultimate price.Adam is tempted. Life is rubbish, his girlfriend's over him, his brother's gone. So what's he got to lose? Everything, as it turns out. It's up to his girlfriend, Lizzie, to show him...

I absolutely loved reading when I was very young, but when I went to high school things changed and I found myself rarely reading until the age of 18! However, there was one book during that period that I did read, one that was recommended to me by a teacher and it was a book that quickly became a favourite. That book was Junk by Melvin Burgess, a young adult story based around drugs. When I heard about The Hit, another book with a storyline based around drugs, I was full of excitement - could it possibly be better than Junk?

I absolutely loved the idea of this book. Burgess has created a fictional drug called, quite simply, Death. If you take Death, you will have a euphoric week, everything feels great, but at the end of this week, you will die. There is no antidote to the drug, so once you take it, there is no going back. The Hit is set in the future in the UK, it's not an unrealistic future but it is a dark and difficult time with people struggling to live well. After a very popular singer takes Death, the drug becomes popularised and is handed out to rioting crowds of people. Death is the most interesting concept in this book, making you ask yourself, would you take it? I wanted some morality, some gritty issues, something that could draw me in and make me want to know everything about this drug, but unfortunately, I didn't really get that.

This book isn't really about Death, it actually takes a bit of a back seat. Mostly, this is a book about Adam and Lizzie getting in trouble with a (Death) drug dealer - cue lots of chasing and violence. I'm sure there will be some suspense for some people, but frankly I didn't care enough about the characters to be sitting on the edge of my seat. The slightly more political side of this book, the group of protestors named The Zealots was slightly more interesting - I liked reading about them, but again, I'd have liked to have learned more about them.

The story revolves around our protagonist, Adam, who decides to take Death. I didn't particularly like Adam, I didn't like his 'bucket list' and found him to be somewhat selfish and superficial - lets just say that if he was a real person, I wouldn't want to be friends with him.  His girlfriend, Lizzie, fell just as flat as Adam, I just found them both uninteresting. The story itself would've felt a lot stronger if the characters had stronger personalities. The only character that I felt vaguely interested in was Christian, a very powerful, but also very ill man. Christian was a brilliant villain, he was psychotic and fixated on damaging people's spinal cords, attempting to paralyse them if they don't do what he wants - it sounds extremely vicious and it was, but for me it was good to actually feel something (even this repulsion!) when reading this book.

Overall, The Hit was unfortunately a big disappointment for me. I did read the whole thing as I hoped for more information regarding Death and yes, I did want to find out the outcome. Mostly though, I read the whole book because I refuse to not finish a book I've started. I can't say that it was enjoyable, but it certainly wasn't the worst book I've read. The concept was brilliant and I just wish that the execution had been better. If you do want to read a good book by Burgess, just pick up a copy of Junk which is, in my opinion, far superior to The Hit.