Moments after several huge earthquakes shake every continent on Earth, something strange starts happening. An inner rage has been released and some people cannot fight it. For those who can, life becomes a battle to survive . . .


Are you ready to face the Dark Inside?

Something different today - I have been told by the publisher that DARK INSIDE by Jeyn Roberts will be released in the UK in paperback very soon! I actually read the book when it was first released in the UK in hardback and I really enjoyed it, so I'd like to bring your attention to it. I gave it a very firm four stars and wrote this short review of it, last year: 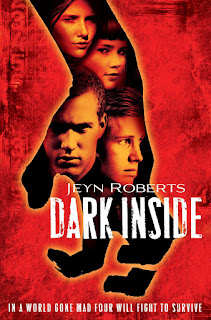 "Dark Inside was a fantastic yet disturbing read. Although I shouldn't judge books by their cover, it looked a bit boy orientated which I found a little peturbing after finding Grant's Gone disappointing. The story was interesting and easy to follow. Right from the beginning, I was thrown into a world that had been completely shaken up by an earthquake and the consequent turning of a group of humans into zombies. This is my first zombie novel and it surprised me how much I liked it. The zombies weren't described as being overly gruesome but were infact quite hard to distinguish from humans, which made them even more frightening and dangerous. There seemed to always be some tension between the main characters and whoever they met, for this reason, which really built up the suspense. The story is told in four points of view, by Mason, Michael, Clementine and Aries, all of whom I found to be very interesting and well developed. It was interesting to see how their different situations in different places affected them. The 'Nothing' point of view was effective, but I did think it could've been developed some more. I found the whole situation to be really captivating and the writing was good. The descriptions really did make me feel unnerved at points, the atmosphere was terrifying and on-edge. There was action throughout but it wasn't too much, the book did feel well balanced. I wasn't wholly satisfied with the ending and though it was nice to see the protagonists unite, I think it could've been even more exciting and expanded upon. This was much better than expected and I'd love to see more from Roberts."

I am so excited that I have since found out that this will be a series and can't wait to get my hands on the next book! If you haven't already read it, I'd urge you to pick this up and give it a go! The paperback will be released 24th May 2012 by Macmillan Kids.