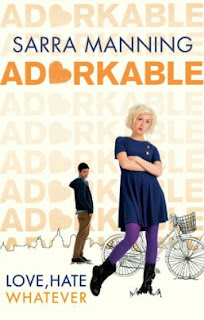 Jeane Smith is seventeen and has turned her self-styled dorkiness into an art form, a lifestyle choice and a profitable website and consultancy business. She writes a style column for a Japanese teen magazine and came number seven in The Guardian's 30 People Under 30 Who Are Changing The World. And yet, in spite of the accolades, hundreds of Internet friendships and a cool boyfriend, she feels inexplicably lonely, a situation made infinitely worse when Michael Lee, the most mass-market, popular and predictably all-rounded boy at school tells Jeane of his suspicion that Jeane's boyfriend is secretly seeing his girlfriend. Michael and Jeane have NOTHING in common - she is cool and individual; he is the golden boy in an Abercrombie & Fitch T-shirt. So why can't she stop talking to him?

My thanks go to Atom for sending me this book in exchange for an honest review.

As soon as I heard that there was going to be a book called Adorkable, I jumped at the chance to read it! I mean really - a title that includes the word 'dork' just has to be good, doesn't it? The premise sounded pretty cool too -  the story is about a self-proclaimed dork called Jeane and her ever-changing relationship with the 'cool' guy at school, Michael. I've not read anything else by Sarra Manning, so I wasn't sure what to expect but this one looked like a fun read.

Every review I've read for this book so far have been raving 4 or 5 stars and I do feel bad that I've not managed to rate this one higher, but I think I must've missed something. I'm all for dorkiness and I'd definitely call myself a nerd. Like Jeane, I am not afraid to speak my mind or opinion (something that's gotten me into trouble a couple of times) and I'm not afraid to express myself in the way I want, whether it's through my clothing, music or art. I am also, as you may be able to tell, pretty much addicted to blogging and twitter. So yes, you could say I'm a lot like Jeane Smith, however, I still just couldn't connect with her. At points, I just felt that she was trying so hard to be different or 'out-there' that it started to annoy me and I felt as though she was a little bit hypocritical at times.  Jeane often began criticising other people for what they wore, watched or listened to, even though that may have just been what they liked which I found to be a bit unnecessary - she might like being 'different', but she didn't need to force her opinions on others. At times, I felt she was slightly inconsiderate and making a big deal over nothing. Jeane was also meant to be an international online celebrity which had potential to be really great, but due to her slight arrogance, I couldn't get away with it. I don't know though - maybe I do see a bit of myself in her and I don't like it.


I did enjoy reading about the more personal, quiet side to Jeane though, and that seemed to come out more when she interacted with Michael Lee, the boy who seemed to have it all - looks, popularity and good grades. I didn't dislike Michael until he started to become ashamed of being seen with Jeane which just seemed ridiculous. I did find it interesting to see how his opinions changed and it was good to see them both exploring different aspects of how the other one lived. The more 'hidden' and quiet side of Jeane was probably the most intriguing part of the book for me - I mush preferred the second half of the book as we got to learn more about the real feelings of the characters and it seemed a lot more eventful.


I think that the reason I didn't enjoy this book as much as I could have was because it just didn't ring true to me. I may be living in my own little bubble, but at least where I am, I'd like to think you're not completely excluded because of the way you dress - I actually like to think the diversity in dress is something that's becoming more popular. It's true that Jeane also wasn't very popular due to her attitude, but it didn't really seem that way. I did like the use of fun, teenage language and phrases. There were a lot of popular culture references, and that was enjoyable, but I think the book could age easily. The writing itself was fine - I can't complain about that.


With my inability to really love the characters and my quite high expectations, this book didn't really satisfy me as much as it could have. I think that a lot of people will love the outspoken Jeane and the trials and tribulations of her friendship with Michael. I am certainly not put off the author from this book - I have given this book 3 stars and I think that's actually pretty good. It certainly wasn't painful to read and the writing was new, fresh. Unfortunately, I just couldn't bring myself to really care for the characters, which was disappointing.