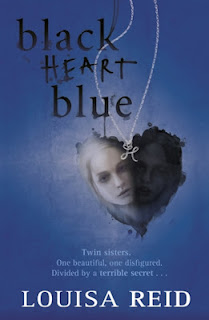 Hephzibah: You've no idea what it's like having a freak for a sister.

Rebecca: Born first, prettier, Hephzi's always been the popular one.

The Father: When he was busy with his bottle we were usually safe. Usually.

The Mother: Her specialist subject was misery and lessons of painful silence ...

Hepzibah and Rebecca are twins. One beautiful, one disfigured. Trapped with their loveless parents, they dream of a normal life. But when one twin tragically dies, the other must find a way to escape. Because if she doesn't, she'll end up like her sister.

My thanks go to Puffin for sending me this book in exchange for an honest review.


On the very first page of this story is a verse from Sylvia Plath's poem, Daddy. I absolutely adore Sylvia Plath, so when I read the verse, I was so excited that I was maybe going to read something that was so marvellously interlinked, but I was also scared that the story was going to be a disappointment - in my eyes, it's quite a big thing to try and follow on after a Plath verse! Thankfully, I think that using the poem was the right thing to do - Reid definitely did it justice with the story that followed.


Black Heart Blue follows the life of two twins - the well rounded and beautiful Hepzibah (Hepzhi) and her disfigured sister, Rebecca. We learn right from the start that Hepzhi has died and we discover exactly how and why as we progress through the book. I thought that the format of the book was really well done. Hepzhi narrates chapters 'before' her death so that we get a clear picture of what life was like for the twins. On the other hand, Rebecca narrates the time after Hepzhi's death and what it meant not just for her, but her family and the community around them. Writing this way meant that we learnt so much about both twins and they were so well developed. The twins had a very troubled past (and present) and we can see this in so many ways - their behaviour, their emotions and through other people's actions towards them. Everything that was explored felt so realistic and had a lot of depth, despite the shortness of the book. We were introduced to several characters including the granny of the twins, Hephzi's boyfriend, her friends, members in the community such as a church assistant and people who Rebecca worked with, as well as non-immediate family members. Every single person in this story seemed to matter and they each contributed something to the story. I was absolutely fascinated with how everyone interacted.


It seems wrong to say that I enjoyed this book due to the subject matter. I didn't really enjoy it as such - there wasn't anything that made me feel very happy, but instead, I appreciated it. I really appreciated how well Reid had portrayed the lives of Hephzi and Rebecca - there were no holds barred on the content - this is a story that involves abuse and a whole lot more. Whilst the events weren't overly graphic or descriptive, they were unbelievably powerful. As aforementioned, the words were haunting. There was a seriously sinister undertone and it worked seriously well.


This is a book that I will recommend to others who are looking for a different read to your usual YA - I'm glad that there's something different to the usual 'boy meets girl' or paranormal subjects. This is definitely not a book for younger teens but for older teens and I know a lot of adults that would appreciate the work that's been put into this too. I look forward to more of Reid's work in the future.