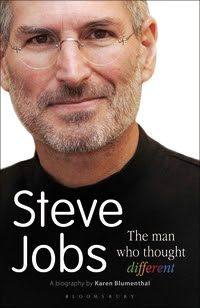 Inventor. Visionary. Genius. Dropout. Adopted. Steve Jobs was the founder of Apple and he was all of these things.

Steve Jobs has been described as a showman, artist, tyrant, genius, jerk. Through his life he was loved, hated, admired and dismissed, yet he was a living legend; the genius who founded Apple in his parent's garage when he was just 21 years-old, revolutionising the music world. He single-handedly introduced the first computer that could sit on your desk and founded and nurtured a company called Pixar bringing to life Oscar wining animations Toy Story and Finding Nemo.

So how did the man, who was neither engineer nor computer geek change the world we live in, making us want every product he touched?

This is his story...

My thanks go to Bloomsbury for sending me this book in exchange for an honest review.

I'm writing this review on my MacBook Pro, whilst listening to music on iTunes. My iPhone sits beside me and my mum is currently using my iPad. I love Apple products and I use them everyday - in fact, I'd feel lost without them. Most of you will either own at least one of Apple's products, or know somebody who does. Even if you don't, you surely must've watched or heard of a Pixar film, such as Toy Story or Finding Nemo. It's pretty clear what sort of impact that Apple and Pixar have had on the world of technology today.

I'm a huge fan of Apple, and as soon as I heard of the biography, entitled Steve Jobs by Walter Isaacson, I really wanted to pick it up and read all about the company. However, as much of a fan as I am, there was, to simply put it, no way that I was going to read a 600-750 page biography. The book is huge and I'm afraid that I just wouldn't have the patience to read it all - I was intimidated by it. When I was told by Bloomsbury that Karen Blumenthal had written a biography that was aimed at the 'iPhone texting, white-headphone-listening, iTunes downloading generation', I absolutely pounced at the chance to read it. At a much more digestible 320 pages (including photographs) and straight to the point, this gave me just the insight that I wanted into Steve Jobs and Apple's life.

I admit that at the start of the book, I wasn't really getting into it. I think that this was partly because I was learning things that I didn't really know about Jobs - he certainly had a bit of a dark side and was quite fiery, but not in a very good way. I think that it's fantastic that Blumenthal did include all of those harsher details though, as it helped me to get to know what Jobs was really like behind the scenes. I went from somebody that, before opening the book, admired Jobs and his creativity, to taking quite a strong dislike to him. However, I came to understand that he was young, he had a strong personality and was determined. Although he wasn't always the most socially acceptable, he had faith in himself and what he was doing, something to admire. I'm glad to say that when I hit the half-way part of the book, I had learnt why he was acting the way he did and began to honour him a lot more. I felt as though Blumenthal was giving him a fair representation, showing both his good and bad sides - of course nobody is perfect.

I thought it was really interesting to see how both Jobs and his companies progressed. It was inspiring to see that although Jobs did hit a lot of difficulties, he still kept going and wasn't afraid to take many risks. I also learned a whole lot things that I had no idea about before reading the biography, some facts were really quite surprising. Alongside the facts about business and technology, particularly towards the end, we learned more about how Jobs dealt with the news of his very poor health and the fact that he had cancer - it was incredibly heartfelt, and I was shedding a tear by the end. It's so sad that such a hugely creative mind is no longer with us, but through learning about him and his products, I'm sure that Apple will still have even more genius to unveil.

Steve Jobs once said "Your time is limited... have the courage to follow your heart and intuition" - no other words could be more appropriate to his actions in his, sadly shortened, life. Blumenthal has done his story justice though, and has certainly made me want to abide by his words of "stay hungry, stay foolish." A fantastic biography, for both teenagers and adults alike, that I'd recommend to anyone wanting to learn more about Jobs, Apple and/or Pixar.