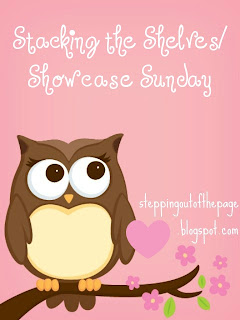 Stacking the Shelves and Showcase Sunday make a place to showcase your new books,
whether you obtained them through the post or otherwise.

Due to all of the drama in the book blogosphere this week, and the accusations that the host of In My Mailbox has plagiarised some of her content, I have decided to stop supporting In My Mailbox and instead, I will now be using the Stacking the Shelves and Showcase Sunday memes to showcase my book haul from the past week!

This week, I received three books in particular that I'm very excited to read because of the fantastic ideas behind them! Those three books are The Glimpse, the extremely long titled The Girl Who Circumnavigated Fairyland In a Ship of Her Own Making and the book with awesome title appeal, Adorkable!
I also received the first two books in the Goddess Girls series, Athena the Brain and Persephone the Phony as well as Back and Deader than Ever (Monster High 4). I'd also like to say many thanks to the author Allison Rushby for kindly sending me a copy of Shooting Stars.

I bought one book this week as it was on offer for £3 and I needed to see what all of the fuss was about - Fifty Shades of Grey. I should probably have a review of this up either later today or tomorrow.
Posted by Stepping Out of the Page at 4/29/2012 01:21:00 pm

Email ThisBlogThis!Share to TwitterShare to FacebookShare to Pinterest
Labels: Stacking The Shelves and Showcase Sunday