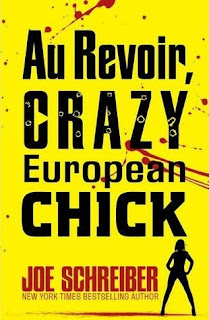 Perry Stormaire is a normal high school senior– he is busy applying to college and rehearsing with his band –until he agrees to go to the prom with the Lithuanian exchange student who is staying with his family. It turns out that Gobi Zaksauskas is not the mousy teenager that she seems but rather an attractive, confident trained assassin. Instead of going to the prom, Perry finds himself on a wild ride through the streets of New York City as Gobi commandeers the Jaguar his father lent him for the prom in order to take out her targets. Perry learns a lot about himself – and ends up with some amazing material for his college application essays.

My thanks go to Egmont for sending me this book in exchange for an honest review.

I didn't really know what this book was about when I picked it up, I just knew that I loved the title! I am so glad that I did read this one as it was so action packed and fun. This book is told in a series of (rather short) college application essays - each chapter starts with an essay question which is answered (usually indirectly) with the part of the story that the chapter covers. I loved this idea as it was both quite unusual and clever. I also didn't expect it to be so funny!

Perry is your average high school guy whose family thought it'd be a good experience to allow an European exchange student to stay with them. Perry has spent months living with Gobi, the Lithuanian exchange student, who seems a bit dull and a bit strange, until he is forced to go to his school prom with her. Perry and Gobi don't spend the night at the prom though - Gobi transforms into a confident assassin and the night is spent driving around New York, taking care of Gobi's business - a.k.a. killing people!

This isn't a very long book which is probably a plus point - everything is quite direct and straight to the point (thanks to Perry and Gobi's personalities), although Gobi is somewhat mysterious - we learn more about that near the end. It would be very easy to devour this in one sitting and I had no problem finishing it in a day. This book is certainly more plot-driven than anything else, with it's murders, shoot-outs, bombing and torture, but that's not to say that the characters are poor. I thought that Perry's interfamilial relationships were interesting, and I instantly loved Gobi when she revealed her true self. They're not particularly complex characters - they are who they are. Perry could be any regular teenager and it's easy to put yourself in his place.

It's not a very realistic story (although it technically could happen), but that gives it a huge injection of comedy - Perry can't believe any of it is happening to him. Both Perry and Gobi have great, though slightly wicked, senses of humour and it really comes across well - I found myself bursting out with laughter at some of the one liners!

This is an addictive, super fast paced, action packed young adult read that will appeal to girls and guys alike. I thoroughly enjoyed the plot, the characters and (maybe above all), the author's ability to make me laugh. I sincerely hope that this not the last we see of Perry and Gobi and I can't wait to see what Schreiber has planned for us next!