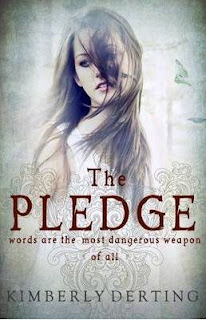 The Pledge (The Pledge #1) by Kimberly Derting
Paperback, 352 pages

Words are the most dangerous weapon of all.

In the violent country of Ludania, the classes are strictly divided by the language they speak. The smallest transgression, like looking a member of a higher class in the eye while they are speaking their native tongue, results in immediate execution. Seventeen-year-old Charlaina has always been able to understand the languages of all classes, and she’s spent her life trying to hide her secret. The only place she can really be free is the drug-fueled underground clubs where people go to shake off the oppressive rules of the world they live in. It’s there that she meets a beautiful and mysterious boy named Max who speaks a language she’s never heard before... and her secret is almost exposed.

Charlie is intensely attracted to Max, even though she can’t be sure where his real loyalties lie. As the emergency drills give way to real crisis and the violence escalates, it becomes clear that Charlie is the key to something much bigger: her country’s only chance for freedom from the terrible power of a deadly regime.

My thanks go to Allison and Busby for sending me this book in exchange for an honest review.

I wasn't sure what to expect from Kimberly Derting's The Pledge. The premise of it sounded absolutely fantastic, but I didn't know whether it'd be able to hold my attention - it sounded slightly confusing, what with the mish-mash of themes. There is a feel to this book that I haven't experienced with others and I found it difficult to categorise it. There are both dystopian and historical elements to this book as well as others and thankfully, they all worked together in a very interesting and compelling way.

The story is set in Ludania, a country which is divided by the different languages that the different classes speak.  The country is overruled by a tyrannical Queen who has no hesitation to execute anyone who looks into the eye of someone who speaks a different language to their own. We soon discover that our main character, Charlaina (Charlie), has the ability to understand every language, which is deathly dangerous. Things start to get slightly confusing for Charlie when she meets two guys - Max and Xander. Max seems to know something about Charlie, and it's not just her ability to comprehend different languages. The story gets very addictive as things start to unravel and we get to learn more about Charlie, the Royalty and the society in general. The setting, plot and subplots were very inventive and enthralling.

All of the characters in this book were mysterious. Although the characters certainly weren't poorly developed, it was clear that we weren't getting the full picture which was very intriguing. I really liked Charlie - she wasn't overly confident, nor was she a pushover, she was just like an average teenage girl, but one with a secret. Her relationship with her family felt natural, despite it being strained due to her 'gift'. Angelina, Charlie's younger and mute sister, was certainly special - I adored her and her bond with Charlie. Angelina's development is something that I can't wait to see. I loved Charlie's best male friend too, Aron, and it's a shame we didn't get to hear that much from him, I'd love to see him developed more in the next books. I didn't, however, like  her best girl friend, Brooklyn (Brook), all that much. I found Brook to be a little too out-there and she didn't seem very loyal - I certainly wouldn't want to be friends with her. I also found her transformation to be unrealistic, one of the weak points of the book. I did find the love interest, Max, to be a bit one-dimensional - the storyline seemed to take more of a lead than his character development, and perhaps his romance with Charlie was a little too fast. Both Max and Xander were fascinating though and so I'd love to find out more about them.

The Pledge has given me a great introduction to a very different setting and to some characters with great potential. This is the book by Kimberly Derting that I've read, but it certainly will not be the last! She has a fantastic imagination and I can't wait to delve deeper inside it with the  next instalment of this series. This is a book that I'd recommend to anyone who likes young adult literature, regardless of whether you prefer historical, dystopian or other story lines - this series will hopefully appeal to most of you. I am really looking forward to seeing how this series will progress.