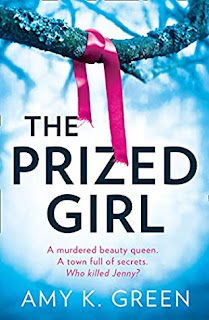 Days after a young teenager named Jenny is found murdered, her small town grieves the loss alongside her picture-perfect parents. At first glance, Jenny’s tragic death appears clear-cut for investigators. In the murder of a former pageant queen from a safe and loving family, the most obvious suspect is a fan who got too close for comfort. But Jenny’s sarcastic, older half-sister Virginia isn’t so sure of his guilt and takes matters into her own hands to find the killer.But for Jenny’s case and and Virginia’s investigation, there’s more to the story. Virginia, still living in town and haunted by her own troubled teenage years, suspects that a similar darkness lay beneath the sparkling veneer of Jenny’s life. Alternating between Jenny’s final days and Virginia’s determined search for the truth, the sisters’ dual narratives follow a harrowing trail of suspects, with surprising turns that race toward a shocking finale.

I hadn't heard of The Prized Girl or of Amy K. Green before glancing upon this book in my local bookshop but I am so glad that I happened upon it. The book tells us of the story of Jenny, a young beauty queen who has been found tragically raped and murdered and her older sister's journey in trying to discover what happened to her.

This book seems to be the perfect bridge between young adult and adult fiction, mainly featuring younger characters and recounting several school experiences, but has a storyline that will appeal to fans of crime stories and psychological thrillers and focusing on some adult themes. The characters were not overly developed but  still well written. Though I didn't feel much of a connection to them, I could've read about them for days. There are two timelines in the book, the story of the past, of Jenny, as we see what led up to the dramatic events which resulted in her untimely death and the story of the present, as told by Virginia as she unravels plenty of secrets and attempts to discover the truth.

The storyline takes precedence in this book and it's clear that Green is a great storyteller. I was gripped from the start. Although I did manage to predict 'whodunnit' around two thirds of the way through, this never distracted from the enjoyment of the story as there was so much that was explored and revealed in the book. I was always wondering something and curious about how the timeline would fit together in the end. This really was a page turner and I was very reluctant to put it down. Although there was a lot going on in the book and there were many twists, turns and revelations it was easy to follow. I was also very pleased that everything felt succinctly wrapped up at the end, though thankfully not rushed. The author did a fantastic job with a truly engrossing plot.

Overall, I really enjoyed this book as it really captivated me and I sped through it! It was simply but eloquently written and an extremely compelling story which tackles several extreme subjects. The Prized Girl is definitely a book that I will be recommending and I would love to read more by Amy K. Green.