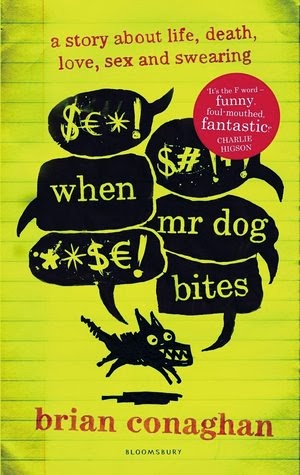 Meet the a-mayonnaise-ing Dylan Mint. He's sixteen and he's got Tourette's. His life is a constant fight to keep the bad stuff in - the words that explode out of his mouth, the tics, the growling, howling dog that tries to escape whenever he gets stressed. Plus there's his mum, who buys him cheapo clothes from Primark and keeps crying. And his dad, who's away in the army and could get wiped out by a sniper any minute.A routine visit to the hospital turns his life topsy-turvy. Dylan discovers that he's going to die next March. It's only August, but still - he has THINGS TO DO. So he makes a list - Cool Things To Do Before You Cack It - and sets out to make his wishes come true...

When Mr Dog Bites is a rather difficult book for me to review. I should start by saying that I didn't know all that much about this book before I started reading - I only read the blurb, and I haven't read anything by this author before. From that alone, I was excited to get started. I loved the sound of this contemporary YA read.

I love reading about real life issues, so reading about a teenager growing up with Tourette's was definitely something that appealed to me and I was interested in how well the subject would be portrayed. Our protagonist, Dylan, also believes he is going to die soon and so I was also interested in seeing what he found most important and what he had on his bucket list. Dylan soon takes action and attempts to win his best friend, Amir, a new pal, and hopes to seduce Michelle Malloy into having sex with him. Alongside that storyline, another issue which is explored throughout the book is Dylan's relationship with his parents, particularly with his father. I found the whole 'revelation' to be extremely predictable, but it did add another slightly more sensible issue to the book, which I thought was appropriate.

When Mr Dog Bites is a strange book to review, because even days after reading it, I'm not sure how I feel about it and I think that it may divide readers. I think the book was okay, it was enjoyable, because I was laid back and relaxed about the issues and situations discussed. There is probably quite a lot of parts of this book that people will take offence to - mocking of disability, racist slurs for example, but  rather this is something that gives the story some authenticity, some realism and admittedly, it does add some humour. Conaghan certainly isn't shy in regards to approaching some of those more slightly controversial issues and casually throwing them out into the open. There is quite a lot of profanity in the book, and at points it sometimes unfortunately did feel quite forced, making reading a little tiresome. However, it can't be denied that these things are also what made the characters more real and in the end, more likeable. Despite not particularly liking Dylan's attitude or outlook at the beginning, I did feel like I really knew him by the end of the book and yes, I could understand him and his feelings more.

Overall, this is a book that I think that will be successful, as long as the potential readers are laid back and aren't going to over analyse it. It's not an ideal book to review, because I don't think it's some sort of masterpiece, nor is it trying to be. This book seems like an attempt to make readers open up towards some issues that probably shouldn't be so stigmatised in the first place, which can only be a good thing.