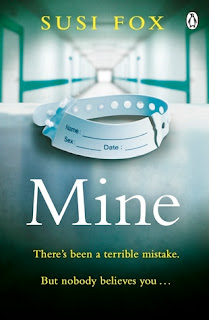 The baby in the nursery is not your baby.

Waking up after an emergency caesarean, you demand to see your son.
But it's someone else's child.
No one believes you - not the hospital, not your father, not your loyal husband.

They say you're delusional. Dangerous.

They suspect you want to steal another baby.
All you know is that you must find your own child before he's out of reach forever.
And you're a doctor - you would know if you were losing your mind.

Mine by Susi Fox is a psychological thriller about a woman, Sasha, who has just awoken from having an emergency Caesarean section, only to discover that her new baby, Toby, isn't exactly what she expected - not only her baby is a different sex to what was predicted at her ultrasound scan, but she just feels no emotional connection to the child before her. Unfortunately for Sasha, nobody believes her.

The premise of Mine is a fantastic one with so much potential. Sasha, the people around her and the reader are all unsure of whether Sasha's thoughts are well-founded or the product of a postpartum depression or psychosis. Whilst the people around her are adamant that she is wrong, Sasha is almost certain she is correct in the thought that the Toby isn't hers and whilst remaining in hospital she is determined to find out what happened during and shortly after the caesarean. Fox does a brilliant job of keeping the mystery going - as a reader, I was jumping from one opinion to another and at many points, I simply had no idea what I thought. I loved this aspect of the book - I couldn't establish a solid opinion and that's a really great thing with a psychological thriller.

Whilst I initially enjoyed the book and loved the premise, unfortunately, the book quickly became quite tiresome. I found the book to be very long-winded and it just seemed to drag on and on without making much progress. The book was almost completely set within the hospital which I can understand, but it soon became claustrophobic and repetitive. I didn't take to any of the characters - I didn't feel any passion from the characters and sadly, not much compassion for them. Sasha's character was the most well developed and again, I found the confusion about her mental state intriguing, but not fascinating enough to hold up the book alone. Sadly, the ending didn't redeem the book as it seemed so far-fetched.

I love a book which makes me unable to determine my own opinions or thoughts on what has really happened and this is where Mine really succeeds. The premise was fantastic and it started out well but unfortunately my attention decreased the further I progressed. Personally, I would've preferred a more fast-paced and realistic read.