The End Of Her 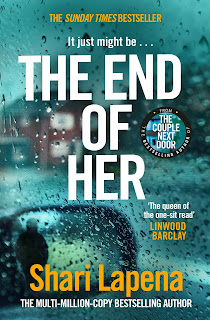 Description via Goodreads:It starts with a shocking accusation...

Stephanie and Patrick are recently married, with new-born twins. While Stephanie struggles with the disorienting effects of sleep deprivation, there’s one thing she knows for certain – she has everything she ever wanted.

Then a woman from his past arrives and makes a shocking accusation about his first wife. He always claimed her death was an accident – but she says it was murder.

He insists he’s innocent, that this is nothing but a blackmail attempt. But is Patrick telling the truth? Or has Stephanie made a terrible mistake?

How will it end?

As soon as I read the blurb to Shari Lapena’s latest Psychological thriller, The End of Her, I was excited to grab a copy and give it a read. Lapena is a highly regarded author and I was elated to get the opportunity to read some of her work.

The story centres around Stephanie and Patrick Kilgore whose lives are turned upside down when Erica Voss, the best friend of Patrick's late first wife creeps into their lives, claiming that he was to blame for his first wife's death.

The first section of the book mainly focuses on Stephanie (side note: it is weird reading about a character who shares your name!) who is suffering from insomnia following the birth of her two daughters. This becomes very interesting when there begins to be some mysterious happenings and Stephanie starts to doubt her own memory and thoughts. Sleep deprivation has the potential to be a great basis for confusion and psychological play which Lapena did use to her advantage at the beginning of the novel but I think it had the potential to go even further - for me, this section of the book, right at the beginning, was the psychological highlight of the whole novel.

The death of Patrick's first wife is intriguing enough to hold your attention throughout the whole book and there is definitely a sense of intrigue and wonder about what really happened. The mystery is fuelled by the character of Erica who is manipulative and firmly regards herself a force to be reckoned with. Her actions implicate several other characters which is, at points, interesting but frankly, I simply found her to be too frustrating at points. Lapena did a fine job of creating a highly dislikable character. I did find the subplot of her relationship with a second family to be very intriguing but was let down at the lack of progression and explanation regarding them.

Overall, the book is an easy to read thriller which manages to hold attention. It's a perfect book for anyone who wants a quick, entertaining read, however I would have personally preferred more depth and development. I wasn't overly surprised by the ending and I think it will be one of those 'marmite' endings for readers. Whilst this isn't a particularly memorable book, its an easy, enjoyable way to pass the time.